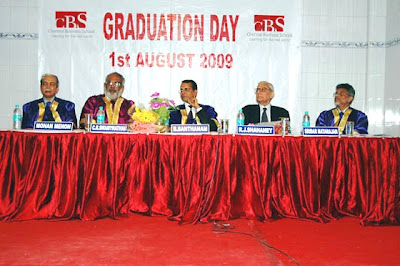 On the evening of the 1st of August 2009, the whole of CBS family gathered at Anugraha Hall to award and bid farewell to the CBS 3rd batch students (2008-2009). For most of them, it would have been a time of mixed feelings of joy at having finally completed a tough and demanding one-year course, relief at having successfully reached the next significant threshold in their lives and perhaps some trepidation about what the future holds for them. Seated on the left of the aisle, they exuded a quiet yet infectious sense of anticipation and excitement, causing us all to look forward to the proceedings.

Mr. Mohan Menon, member of the Governing Council, gave an introductory speech, in which he mentioned the recession and its effect on the employment market. He said that even the economists could not predict the downturn. The Queen of England who lost a bundle in the meltdown asked her advisors as to why no one saw it coming. Their answer "..it was a result of the combined failure of brilliant minds". However, he concluded that things were gradually turning around, economy is limping up and companies have started hiring, therefore, the students should see the brighter side of the current situation.

Then, Mr. Ram Shahaney, Chairman of Ashok-Leyland and Chairman, Board of Advisors of CBS gave a short speech advising all of us to have a burning desire to achieve our goals, yet not to let go of our core values.

Mr. C.R. Swaminathan,( Chairman- CII Southern Region and Chief Executive, PSG Institutions) the chief guest of the evening, gave an stirring speech saying that today’s professionals should effectively focus on the well-informed customers. It is essential for the managers to have a wide knowledge of the global market which has a significant impact on the national one. He ended his speech with a moving and stimulating short story about balancing work, family and relationships. Then came the most awaited moment, the distribution of degree certificates.

This was followed by an inspiring speech by the guest of honour, Mr. B. Santhanam, Managing Director, Saint Gobain Glasses India Pvt. Ltd. He stressed on the importance of emotional intelligence, a fundamental skill that all managers should develop, since that is a great differentiating factor. While being competitive, today’s world requires collaboration too, often between competitors. Therefore, he suggested the students to learn to be able to work as competitors as well as collaborators. According to Mr.Santhanam, social networking is another expertise that we must acquire, investing time in it, and training ourselves to make accurate insights, which would help us in the long run. Finally, he concluded by saying that in-depth domain knowledge is indispensable for a bright career.

Mr. Santhanam then gave away the special awards to the outstanding students and also released the maiden issue of “CBS Business Review”. The brilliant ceremony concluded with the national anthem. 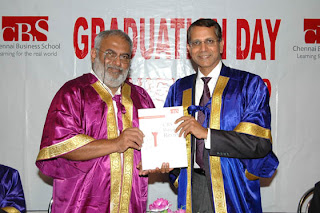 As we made our way up to the food bar for the high-tea, I wondered, what we would feel at this time next year. So much of it would depend on our own all-round growth as professionals and of course on the economic situation then. Nevertheless we would, like them, be ready to face the new challenges awaiting us in the real world outside. So, from the part of CBS Batch 4, we wish them... Adieu... Bonne Chance!

Posted by ManageMarketing at 11:32 AM