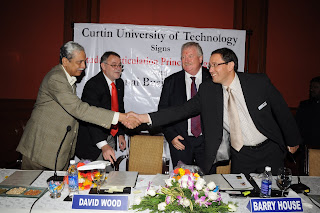 There was a time when working professionals learnt things the hard way in International environments. They learnt communications, culture and business negotiations on the job. The training wasn’t formal, there were no strict rules and they were only educated with “don’t”s. However, since ignorance was indigenous, people invariably found a variety of ways of goofing up. It’s amazing how the B-Schools instantaneously pick up cues and start working on filling the gaps. International exposure is one solution to cover the pitfalls in such areas. However, the exposure must be imparted in Management courses themselves, so that management graduates can leverage their skills more effectively.

Last week, Chennai Business School and Curtin Business School from Australia (incidentally, also called CBS) signed a “Student Articulation Principal Agreement”. The agreement would facilitate transferring students to Curtin Business School for one semester, either at the end of the course or, during the last trimester, thereby making them eligible for a Masters of Management degree from Curtin Business School. We were thrilled at the prospects! No standing in queues at “Study in Australia” exhibitions, no apprehensions about the choice of B-School, no fear of being left alone and no home-sickness. A Post-Graduation programme in Management in one semester is indeed a great opportunity. It was a great feeling when we learnt that Curtin was recognizing our hard-work that we already put in their first semester subjects and declared that they were waiving it off for us. What’s more, they were also recognizing our alumnus. So they too can benefit from the relationship between both the CBS-es.

We had Professor Tony Travaglione – Head of Management studies from Curtin to break the good news to us. Infact, we observed that Curtin like our own Chennai Business School relied on industry professionals and organizations for imparting knowledge to Management students. They have tied up with renowned companies like Qantas, Bankwest, Clayton and Local Chambers for internships and Consulting. The semblance of Curtin with our own CBS was a very comforting feeling and somehow, the Masters Programme in Curtin seems to be an alluring thought – if a student could get that much-sought-after international exposure in the same degree with a little more of time, effort and cost, it’s a wonderful outcome of synergies between two quality institutions.

So, being local is no longer an issue, as long as you think Global!!