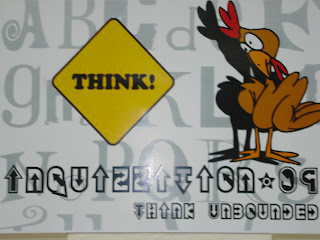 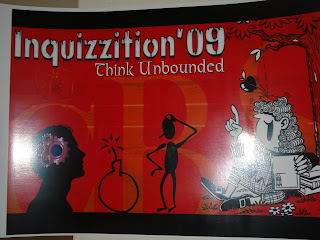 “Orkut Buyukkoten” (Founder of Orkut); “Skype” developed by two programmers from Estonia, Niklas Zennström & Janus Friis – these are just some of the simple answers that were part of an exciting quiz event- Inquizzition’09- CBS’s own version of an intra quiz competition that got kicked off with a wide range of questions. 6 teams formed based on the prelims conducted within the class, participated in this event.

Amar Vishwanath, the Quiz master for the first edition of Inquizzition ‘09 pumped up adrenalin with his interesting set of questions. A Senior Systems Engineer working at SETLabs- the Research arm of Infosys Technologies, Bangalore, he conducts quizzes across Infosys DC’S and is passionate about quizzing. He is a member of the Quiz Foundation of India and conducts quizzes in colleges under the Karnataka Quiz Foundation.

The Quiz had interesting rounds. The first round was: “Common place things”, and the opening question was an interesting one about CBS itself! This was followed by “Who, Where, What…”, “Masala Mix” and “Bring on the Visuals” (Theme - Indian Advertisements in the 80's and early 90's).

The rounds involved interesting questions that kept us quizzing for more than an hour. The participation from the teams as well as the audience was great. Finally it was Team 2 comprising Ebinezar, Devipriya and Benoy who won. Team 3 represented by Haritha, Sarathy and Gaurav Jain was the runner up. We thoroughly enjoyed the quiz and were already planning the next event! Inquizzition’09 is only the beginning of a great time of quizzing ahead at CBS. A special word of thanks to Sarathy for helping us get Amar to conduct the Quiz and Pranesh for those excellent posters!