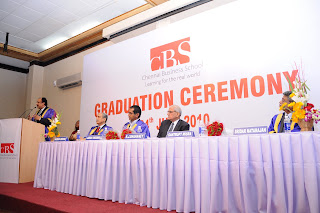 The evening of 24th July 2010 was teeming with excitement, anticipation and relief for the fourth batch of students of CBS. Their hard-work and commitment had finally paid off and they were about to receive their degrees. One could see proud faces dressed in black graduation robes, cheerfully meeting up with old buddies, recalling their good old days and exchanging congratulations.

The evening started with Mr. Mohan Menon’s inspiring and encouraging welcome address. He started by sharing some details on the book ‘An area of darkness’ by V.S. Naipaul that enunciated the poverty and the sad state of India as a country in the late sixties. Mr. Menon correlated the situation in the book to the recent recession and the role of students as managers who can bring light into such ‘dark ages’.

Mr. R.J Shahaney briefed, those present, on the various planned initiatives of the school and shared few pearls of wisdom for the students to carry to their Managerial lives. Some of the best were – “Be passionate about your work”,” Think Big”,” Take decisions and stand by them” and most importantly – “Live life by design and not by default”.

The next to speak was the Guest of Honour Mr. Jairam Varadaraj, who threw light on the brand image of India Inc. True that we were a cost-effective out-sourcing haven, but then, it is not healthy to settle down for such an image. We have a lot to accomplish when it comes to developing, strategizing and executing solutions to help customers and thereby, ascending in the value chain. We are replete with tools, he said. But unless we know the utility of such tools, they are just, a mere ritual. The ideas presented by him were intriguing and intellectually stimulating.

And then came Mr. Santrupt Misra, the Chief Guest who had the audience in splits when he equated the convocation to a ‘conspiracy’ wherein the students were made to sit through one last boring lecture by the professors! (surely not in the context of CBS) He gave five beautiful pieces of advice – 1) Managers learn everyday, 2) Failures are, in reality, hidden opportunities, 3)Focus on win-win situations rather than cut-throat competition, 4) Career success is a gross-product of several attributes of oneself and finally, 5) Giving back to the society is the best possible way to advancement.

Finally our Dean, Prof Sridar Natarajan, took over the podium for distribution of degree certificates and announced the best student awards for various Varsities. Varsha Vasudevan was the best outgoing student for overall academic performance. The event concluded with a vote of thanks by the Dean.

As we watched the previous batch graduate in all their glory, it occurred to us that a year from now, it would be our turn...