Objective of the study

•To gain an insight on the concept of a Self-Help Group (SHG) as a tool for micro credit, its working, bank linkage.
•Working of Sruthi SHG

•Started in 2005 by 18 women residing in the same locality
•All of them had no previous “work” experience
•But they did small scale business activities like undertaking party orders, selling homemade snacks, sarees, etc
•They got to know of SHG concept through another similar one operating in the same locality
•Approached Women’s Development Committee of TN and formed Sruthi SHG
Associated with an NGO called Asha Nivas
•Started off its SHG activity by setting up a canteen in Co- optex, Chennai
•Initial money was invested by the members
•On initiation, 5 notebooks for account maintenance is given
•Bank loans are based on the strict maintenance of the accounts
•Weekly meetings are held and the minutes of the meeting are recorded
•Discussions are held on current affairs and info from the weekly magazine circulated by the NGO
•Profits are shared on a weekly basis and the salaries are weekly too
•Brownie points for CSR activities
•Awarded the Best SHG by the TN Govt for 2008 & 2010
•Common account opened with Indian Bank with minimum savings of Rs.100 p.m
•Members can borrow from the fund at an interest rate of 1paise repayable in 10 months
•The interest received is again split among the members
•The members also borrow on the SHG account for their personal & business development needs.
•Prefer to borrow as SHG because of low formalities .
•Accounts are maintained by 3 members nominated by the group.
•Loan amount to members is based on the monthly savings they have in the common fund
•Sruthi SHG has so far borrowed close to 5 lakhs from Indian bank through their micro credit wing under the Bank –SHG linkage programme
•I Loan – 40K (Repaid)
•II Loan – 1.3 Lakhs (Repaid)
•III Loan – 3.6 Lakhs (Active)
•Out of the loan amount, 36K is taken away in the beginning and a fixed deposit for that amount is made.
•Only principal repayment for the Fixed Deposit value.
•In case of default the FD is taken by the Bank
•If repaid, the FD along with the interest is given to the SHG. 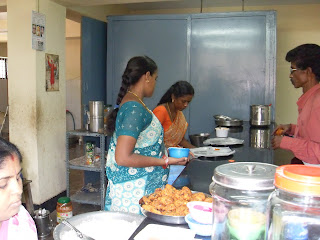 Advantages of the Bank – SHG Linkage

The linkages of SHGs with banks aims at using the intermediation of SHGs between banks and the rural poor for cutting down the transaction costs for both banks and their rural clients. The objective of the linkage Programme could be:
-To evolve supplementary credit strategies for meeting the credit needs of the poor
-To build mutual trust and confidence between bankers and the rural poor.
- To encourage banking activity, both on the thrift and credit sides, in a segment of the population that formal financial institutions usually find difficult to reach.

Besides, financing through SHGs reduces transaction costs for both lenders and borrowers.
•While lenders have to handle only a single SHG account instead of a large number of small-sized individual accounts,
•Borrowers as part of a SHG cut down expenses on travel (to & from the branch and other places) for completing paper work and on the loss of workdays in canvassing for loans.