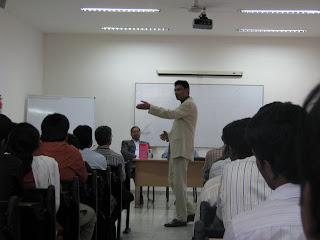 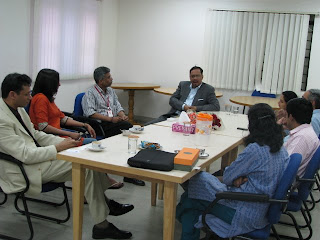 Dr. Nirmalya Kumar spoke about the difficulties faced by CEO’s in expanding their markets globally. He spoke about the difficulties faced during marketing decision making due to lack of proper performance metrics which could not be provided by the chief marketing officer due to certain constraints and the risks that have to be taken if an accurate estimate could not be given. He explained the measure of return on investments in production or operations, where the metrics are clear and compared the same with that of marketing.

He also emphasized that product differentiation would be the best way to compete in a highly competitive market than waging a price war. He also emphasized the fact that marketing teams must be able to adapt to the ever changing global scenario and companies must be in a position to exploit new markets quickly to establish themselves as market leaders. He also discussed a new terminology in segmentation called “cross national segmentation” wherein a company which wants to have a global presence tries to segment the people across countries using similar parameters by which the company would be able to sell the same product across different nations. But, In order to capture the market it is necessary that you have to feel the nature of place, culture, behavior, etc in order to capture the market. It won’t work if the key policy and decision-makers are somewhere in USA and they have to win over in China. There is a necessity that they have to gel with the population of the particular country in order to promote their product.

He underlined quite some impressive management insights like the decision-making in P&G where the decisions are not short-term, but one that will cater to the sustainability of the company for the next one century at least. Overall it was an excellent session that highlighted the need to differentiate and quickly adapt to changes to tap global markets.

Posted by ManageMarketing at 3:02 PM